This blog is the result of 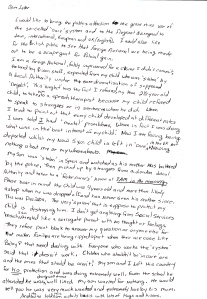 I would like to bring to the people’s attention the gross misuse of the so-called ‘care’ system and the flagrant disregard of law, international, European and UK (English). I would also like for the British public to see that foreign nationals are being made out to be a scapegoat for political gain.

I am a foreign national, falsely imprisoned for crime I didn’t commit, tortured by prison staff, separated from my child who was ‘stolen’ by a Local Authority under the overdramatisation of supposed ‘neglect’. This ‘neglect’ was the fact I refused my then 2 1/2 year old child to take him to a speech therapist because my child refused to speak to strangers or in sentences when he did. When I tried to point out that every child developed at different rates, I was told I had ‘mental’ problems. When in fact I was doing what was in the ‘best interest of the child’. Now I am facing being deported whilst my now 5 y.o. child is left in ‘care’ in the UK knowing nothing about me or my whereabouts.

My Son was ‘stolen’ in Spain and watched as his mother was battered by the police. Then picked up by strangers from a London local authority and taken to a ‘foster carers’ home at 3am in the morning. Please bear in mind the child was 4 years old and more than likely asleep when he was dropped off and has never seen his mother since. This was Dec. 2011.

The very ‘system’ that is supposed to protect my child is destroying him. i don’t get anything from Social Services, basically I am treated like a surrogate parent with no thought or feelings. They refuse point blank to answer my questions or anyone else for that matter. Families are being ripped apart when there are cases like Baby P that need dealing with. Everyone who works the ‘system’ said it doesn’t work. Children who shouldn’t be in ‘care’ are and the ones that should be aren’t!

My son and I left this country for his protection and was doing extremely well. Even the school he attended he was doing well and was well liked. My son wanted for nothing. He would tell you he was very much wanted and extremely loved by his mum.

And he was told this on a daily basis with lots of hugs and kisses.

Throughout our ordeal no-one has placed themselves in his shoes or taken into consideration his psychological, mental or emotional distress this is causing him.  The true victim in my case is my son. No-one in the courts or even solicitors have asked my son’s wishes / feelings. In the Children’s Act 1989, the Act which is used to remove children, the courts are to take into account the wishes / feelings of the child in relation to their age. This has never happened in our case. Even a Cafcass worker stated she had never spoken to my son about anything. She only saw him in a playroom thru a door window.

I don’t wish to stay in the UK but I do want my son. Why should the British citizen pay for a child to be in ‘care’ when the child has a loving family? I came here and worked, paid taxed and rarely asked for help. I contributed to society and feel that the treatment I am getting for doing so, is wrong. Like many foreign nationals we come to work, like the Black and Irish did many years ago. Now they take our children and try and force us to leave them behind. Why is society like it is today? Maybe cause the law are involved in areas they need not to be.

Having been in prison for 21 months, I have found that over 3/4 of prisoners have either been in ‘care’ or had social workers involved in their life. That is a high proportion and most which need not happen. Out of this 3/4 over 1/3 have used drugs and/or alcohol dependent. Some go out with the hope of change, most never make it and come back within months.

This is the story of a mother who was separated from her then 4-year old boy in December 2011 and who has not seen him, since she was

EU PARLIAMENT: Abolish Adoptions without Parental Consent – Did you Sign?

Petitions for the Cause

Support for the CASE

Support for the CAUSE